skip to main | skip to sidebar

A high school friend of mine went missing last week, when a dock he was on collapsed, and now they think they've found his body.


He was a person who was full of life, made friends easily, and will be sorely missed.
Posted by Liz Miller at 8:21 AM 4 comments:

I went to bed last night totally thinking it was Tuesday

Which meant that at 6:00 AM, when my alarm went off, I totally thought it was Wednesday, and so I snoozed until 6:30...when my phone reported that I was going to be late for dropping MM off at ThursdayEarlyMorningExerciseThing at his school. Which we have only missed twice before.

Email ThisBlogThis!Share to TwitterShare to FacebookShare to Pinterest
Labels: More Mommy than Mystery, Not much going on., School Days, Self-disgust and other fine sentiments

Today, one of my bras broke.

The under wire showed itself to the world. It didn't have the decency to poke out under my arm, as broken bras normally do. No, this one came out in the center, right by the pretty little bow.

This is not a minor thing. My bras are, by necessity, feats of modern engineering and thus, they are expensive.

Fortunately, my mother gave me a gift certificate to Nordstrom's for my birthday. I know now what I will spend it all on. Unless they no longer carry my size. In which case, hello, BiggerBras.com!
Posted by Liz Miller at 8:17 PM 6 comments:

Email ThisBlogThis!Share to TwitterShare to FacebookShare to Pinterest
Labels: G is for Ginormous, Household science, Not much going on.

I've been waiting 30 years for this day

Posted by Liz Miller at 1:29 PM No comments:

Email ThisBlogThis!Share to TwitterShare to FacebookShare to Pinterest
Labels: Deep Thoughts, Home for the Holidays, Video

It's getting easier to be green

Up until last November, neither of our cars were terribly efficient. I had a 2002 Kia Sedona, he had a 1997 Jeep Wrangler. Both were bought used. The Kia was bought when our son still had a lot of equipment to haul around.

We were thinking about getting more efficient vehicles, but you know what the greenest car is? One that you already have that's in working condition. So we waited...and we dreamed of better than 20 miles to the gallon.

Then I was in a collision, and the Kia was replaced with a 1998 Toyota Camry. People, I regularly get over 30 miles to the gallon in that puppy, just tootling back and forth from work!

And then we had to replace the Jeep. This past weekend, we got a 2002 Honda Civic. It's even more efficient than the Toyota! Plus I work just a few miles from home! This is so exciting!!! Just as Big Oil is taking advantage of unrest in the Middle East to gouge consumers, we're thumbing our noses at them and benefiting local businesses at the same time!!

The Toyota was purchased at Lindsay Volkswagen. We went back to them last week, but they didn't have anything in our price range this time (though they had a sweet red Mini Cooper), so we got the Honda from Honda of Dulles. We had a great experience at each of their stores, and I've recommended them to friends. If you're in the market for a car, you really could not do better than to shop at either of their stores --- and they're even in our district! 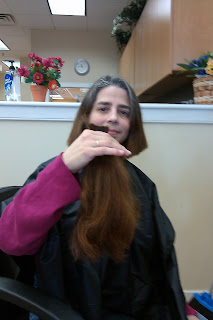 Over ten inches off! Sent to Locks of Love. 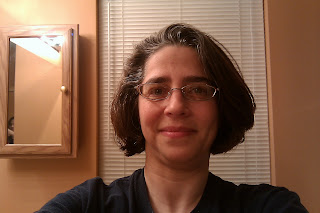 Here's the after picture! I feel so free and light.
Posted by Liz Miller at 8:48 PM 9 comments:

Final Count:
Somewhere around 3500.
That includes team doors and doors from before we started keeping track.